Ali is getting old before he gets old, Internet giants are selling badly collectively, and traditional e-commerce has peaked?

Recently, it has reached the financial report season, and China Stocks have disclosed financial reports one after another. Among them, I am more concerned about itAlibaba and JD.comIt's over.

I don't know what you feel. Personally, I have used JD.com and Pinduoduo Inc. more in recent years. Taobao gives me the feeling that it is high or low. Especially the arrival speed, JD.com's experience is far better than Ali's. Buy in the morning and arrive in the afternoon. This shopping experience in JD.com really explodes Taobao. In terms of price, Taobao does not have any advantages. It is really fragrant to buy many small things in Pinduoduo Inc.. In fact, to put it bluntly, it is still poor...

Therefore, JD.com has also embarked on a road with a unique moat, and it is getting wider and wider. Alibaba, on the other hand, has been eroded by Pinduoduo Inc., Vibrato and Aauto Quicker live broadcast in the core e-commerce business. These are also reflected in their financial reports. Today, let's talk about Ali and JD.com, the Internet giants.

On November 18th, Alibaba Group released its financial report for the second quarter of fiscal year 2022.

Some people may wonder when they see this. Why is it the second quarter of fiscal year 2022?

I have sorted out the difference in the disclosure time of financial reports between Hong Kong and US stocks and A shares. You can have a good look:

Considering the seasonal factors of the e-commerce industry, Alibaba has adopted a different fiscal year calculation method from other companies,Alibaba's fiscal year is from April 1 of that year to March 31 of the following yearSo Q2 in fiscal year 2022 means Q3 this year.

When Ali's financial report just came out, there were many people who ate melons on the Internet, and Ali's profit fell too much. I also went to look at it carefully. At first glance, it is really not optimistic. The net profit under non-GAAP has dropped by nearly 40%. 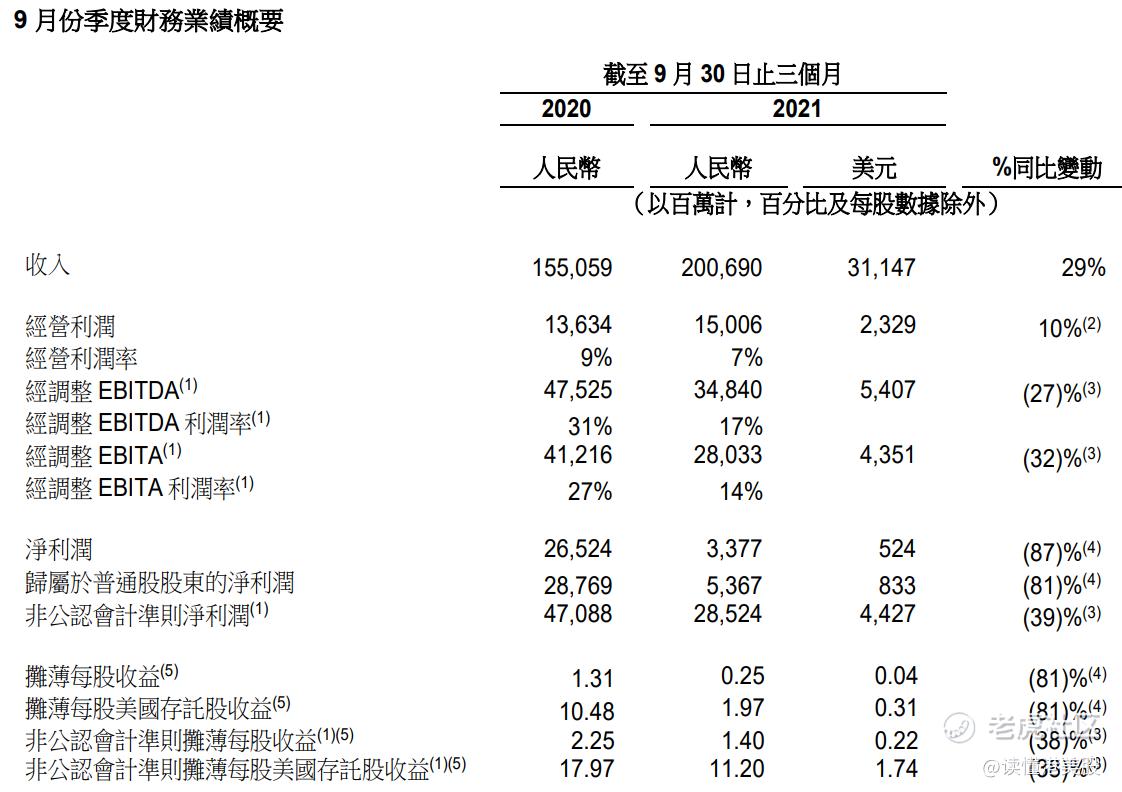 However, we should know that Ali has already said it. "It is planned to use all incremental profits and additional capital in fiscal year 2022 to support platform merchants and invest in new businesses and key strategic areas."

And Ali wants to invest in ESG to create more social value. Now this healthy performance is nothing for Ali. After all, the real focus is to look at the future development.

In the third quarter, Ali Entertainment was the last to grow, and its revenue hardly increased year on year. The penultimate place is the "customer management" income under the "China Retail Business" sector, which only increased by 3% year-on-year. This part of income mainly comes from the advertising fees and commissions of Taobao Tmall.Although this revenue as a proportion of total revenue has declined in recent quarters, this business is still the most important source of revenue for Ali.

According to the financial reports in recent years, we can find thatAli's self-operated business is getting heavier and heavier, and it is more and more like JD.com. The "other" businesses under Ali's "China Retail Business" sector (mainly including Gaoxin Retail, Tmall Supermarket, Box Horse and other direct businesses) contributed 55.132 billion yuan in revenue in the third quarter, a year-on-year increase of 111%, accounting for 27% of the total revenue. 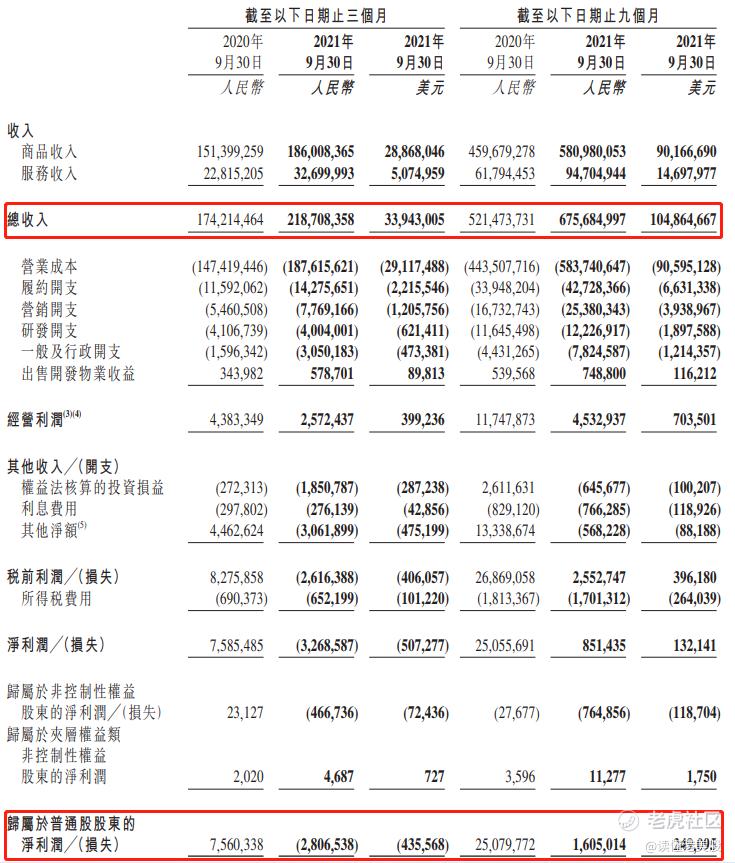 JD.com's income is mainly divided into commodity sales income and service income. The former is self-operated by JD.com, while the latter is composed of "platform service income" and "logistics and other service income".

According to the financial report, the "platform and service revenue" (mainly from advertising and commission revenue of 3P business) reached 16.8 billion yuan, a year-on-year increase of 35%, which was higher than the growth of JD.com's total revenue and significantly higher than Alibaba's "customer management" revenue. 3% growth; In the third quarter, JD.com's "logistics and other service revenue" (mainly from logistics orders) reached 15.9 billion yuan, up 53% year-on-year.

As soon as we compare the financial reports of JD.com and Ali, the difference between them comes out.As the core e-commerce business, JD.com's moat is still relatively deep, but Ali is easily impacted by Pinduoduo Inc., Vibrato and Aauto Quicker, and the e-commerce business has a great impact.

Recently, Vipshop, once the third largest e-commerce platform, released its third-quarter financial report. Of course, the current market value of Vipshop is less than 7 billion US dollars, which is not in the same order of magnitude as Ali and JD.com, and is slowly forgotten by everyone. However, Vipshop is the adherent of the most traditional e-commerce model at present, which can also explain some industry phenomena.

According to the financial report, in the third quarter, Vipshop's net revenue reached 24.9 billion yuan, a year-on-year increase of 7.5%; According to non-GAAP, the net profit attributable to shareholders is 1 billion yuan; Non-GAAP, net profit fell by 49.5% to 628 million yuan.As Vipshop, which has made profits for 36 consecutive quarters, its profitability has also dropped significantly. 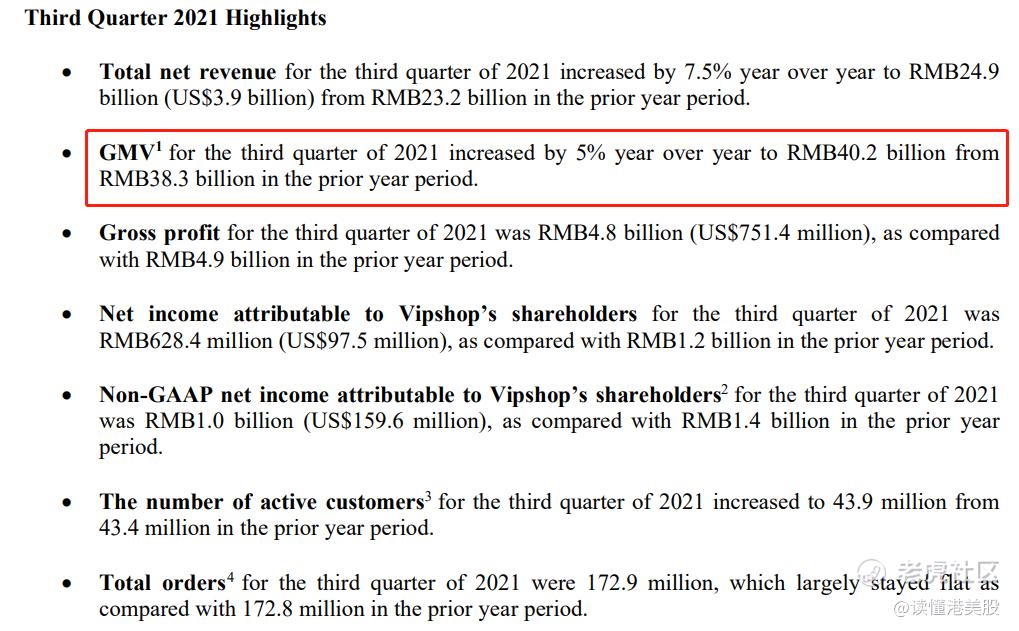 By the way, there is another point in Vipshop's financial report that we need to pay attention to, that is, Vipshop's GMV in the third quarter was 40.2 billion, up 5% year-on-year! Compared with Ali e-commerce GMV, the growth is also in single digits, so,The whole market of traditional e-commerce may really be reaching its peak.

At present, under the background of the country's strong supervision of the Internet and advocating common prosperity, Internet giants are trying to keep a low profile, full of desire to survive, and constantly emphasize that they do not make money, which is reasonable.

But to be honest, the profitability of e-commerce is not as miserable as it is now, and the net profit has dropped too fast. In the first half of this year, it also performed well. In this quarter, the Internet giants collectively sold miserably, which is also very interesting. Is it too hard?

The latest financial reports from Ali, JD.com and Vipshop may have told us that for a long time to come,E-commerce industry will bid farewell to the era of high profit and high growth.

Statement: The above investment analysis does not constitute specific trading suggestions. The stock market is risky, so we should be cautious when entering the market.