Why is the non-agricultural market not worried, but began to worry about inflation?

Last Friday (October 8th), the number of non-farm payrolls in the United States increased by only 194,000 in September, which was significantly less than the expected 500,000, setting the smallest increase this year.

But the market reaction is not strong. The main reason is that the overall employment data is still preferred. For example

Why is the number of non-farm payrolls falling again and again?

Since the outbreak began, with the repeated epidemics in different periods, the recovery of American labor market has always been variable. Because the United States has not adopted strict control measures, the working-age workers in most industries can actually work continuously by telecommuting, except hotels, travel and other related industries that are greatly affected. Therefore, the demand for labor in most industries is still relatively strong, which is the fundamental reason why the number of non-farm payrolls in the United States can continue to recover since the epidemic.

In addition, from the perspective of different industries,The number of new jobs in the private sector was 317,000, which was equivalent to that in August, while the number of new jobs in the public government decreased by 123,000 and the number of educational jobs decreased by 144,000.Not as expected. On the one hand, this is due to seasonal reasons (school term, etc.), on the other hand, it also reflects that a considerable number of people who can or can not work orTemporarily withdraw from the labor market due to the epidemic. 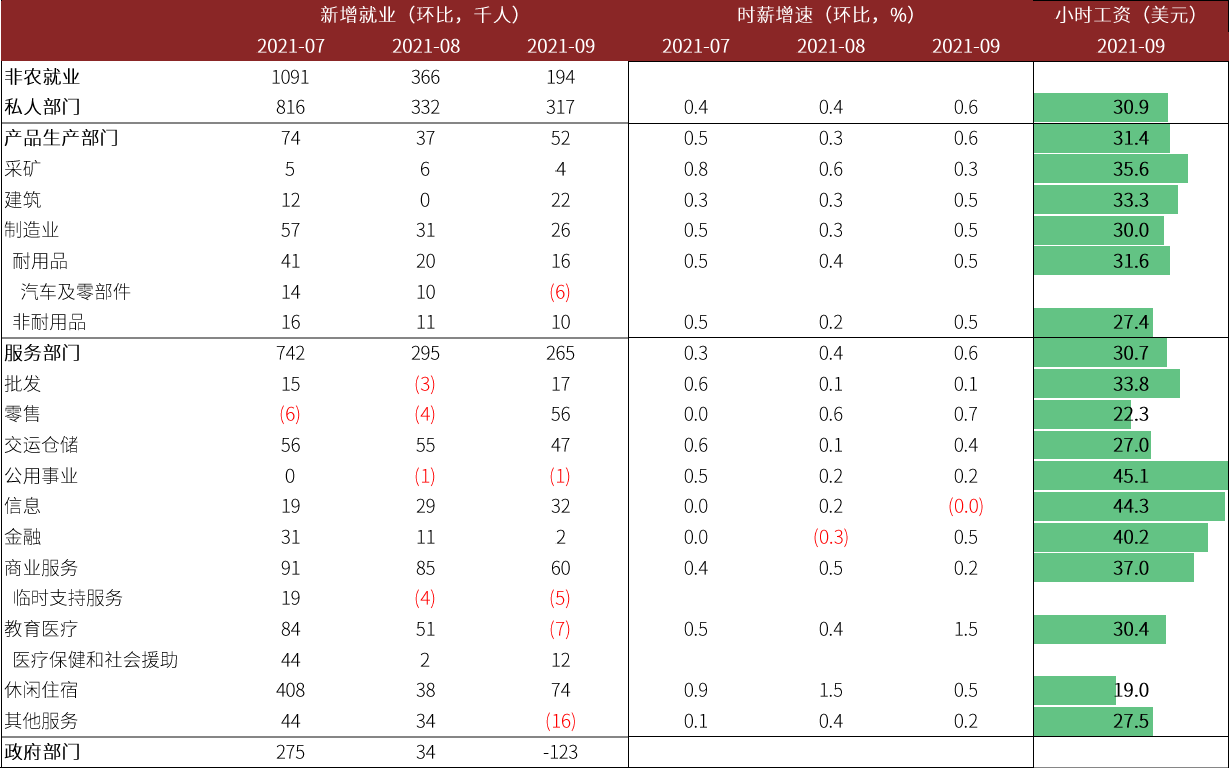 In terms of age distribution, the labor participation rate of people over 55 years old is 38.6%, which is 1.7 percentage points lower than that before the epidemic, and is the main influencing factor. This is also because several waves of "national subsidies" after the epidemic are alsoLet more retirees "retire early". The balance sheet of American households also recovered strongly after the epidemic, which reduced the willingness to work.

Another reason is the supply side. Apart from some jobs that are urgently needed after the epidemic, the overall labor supply side is also affected by factors such as inflation and tax rate.

The expectation of non-farm payrolls in the United States in the future can not be very high.

Does September's non-agriculture mean that the macro situation is getting worse?

On the contrary, non-farm payrolls may be revised later, for example, the previous values in July and August were revised up, with a total of 169,000 more jobs than the previously published data.

More importantly, employees' salaries are rising.The average hourly wage of private employees increased by 0.6% month-on-month and 4.6% year-on-yearAll of them are higher than expected. Although enterprises are faced with cost changes such as rising raw material prices, they also need to raise salaries to attract and retain employees. The supply and demand of labor is more positive to some extent.

However, the number of temporary unemployment and permanent unemployment continues to decrease, which shows that the prospect of unemployed people finding jobs again is still relatively smooth and is a relatively favorable situation

Of course, higher inflation expectations may be a bigger problem at present. But this should not change, at least not slow down Taper, which is expected to open in November-December.

At present, the commodity and energy markets have also begun to show the contradiction between supply and demand. With more and more enterprises announcing supply chain problems, the Federal Reserve should consider raising interest rates "ahead of schedule" in addition to the price-in Taper that the market has already started.

After all, Powell, chairman of the Federal Reserve, said after the last FOMC meeting that "high inflation is temporary, optimistic about the improvement of the US labor market and economy, and does not need a super employment data for September to meet the taper threshold".

Of course, the Fed is extremely cautious in considering "raising interest rates", and needs to meet more conditions. At present, among the members of the Federal Reserve who have the right to vote until 2023, there are more doves. Including Powell himself, whose forecasts are 0 rate hikes in 2022, 2 in 2023 and 2 in 2024, more modest than the median point suggests.

Finally, we willAgain, the impact of excessive inflation on technology stocks and growth stocks in US stocks will be more obvious.

An important indicator is the yield of US bondsAt present, the yield of 10-year US bonds has soared to over 1.5%, and may rise to over 1.7% by the end of the year, which will put more pressure on technology stocks with high valuation before.

Stock market valuations rarely break through under their own weights, and often require other, more basic catalysts. In previous quarters, excellent financial report was one of the important boosters.

And now,There are problems in raw materials and supply chain on the cost side, and the operation side is facing rising employee wages, and corporate taxes will also face increases. The growth of technology companies may face restrictions.