Dingdong Maicai: The danger behind the loss

Bo Hu's finishing touch: Ding Dong's experience of buying food in exchange for large losses, what is the loyalty?

In July and August this year, Ayu "into the pit" Dingdong Maicai in the advertisement of Friends Circle. After placing an order two or three times, she found it "quite easy to use" and gradually became a frequent buyer of Ding Dong.

Before long, many supermarkets and snack bars downstairs became self-raising points for community group buying, and packages piled up in the basket of supermarkets can be seen every day after work. Out of curiosity, Ayu also ordered the fruit preferred by Meituan. "The price is cheaper than that on Dingdong Maicai, and the quality can't be eaten."

This is how Dingdong Maicai's danger comes.

The daily life of the track in the front warehouse is excellent and fresh, and the days are equally embarrassing. From 2019 to this quarter, the daily loss of Youxian was nearly 7.6 billion. However, in 2019, the loss was "leading", and since 2020, the net loss has been less than that of Dingdong Maicai. In 2020, Daily Youxian tends to open up new business, while Dingdong Maicai continues to expand the scale of front warehouse.

Whether it is a loss or a change in the playing style of the two companies, it is inseparable from a "money-burning curse"-the front warehouse mode.

On June 25, 2021, Youxian took the lead in opening the market every day, becoming the "first fresh e-commerce". The "surprise" brought by this first strand is-breaking. The issue price is $13, the opening price on the first day is $10.65 per share, and the closing price is $9.66. The market value evaporates by more than a quarter.

What the market "fears" is that Dingdong Maicai and Daily Youxian are listed in the "pre-warehouse mode" which is still losing money crazily. There is still a deep loss, which means that the profit model of the front position has not run through, and the current investment is more like a bet. If you win the bet, you will be the next "Pinduoduo Inc.", and if you lose, you will be the "same life" that just closed down in July.

In itself, fresh food is a category with high loss rate. Because of the circulation distance of crops, even if it is possible to directly connect wholesalers to purchase goods at the place of origin, the loss should be calculated according to the original time distance of logistics. After arriving at the destination city, at least two layers of sorting "urban warehousing and pre-warehousing" should be carried out, which will cause losses. That is to say, Dingdong Maicai and Daily Excellent Fresh are not dominant in cost.

The biggest cost of the front warehouse is the performance cost. To ensure immediate distribution, storage space should be built to ensure fresh ingredients, workers should sort quickly, and a large number of riders should be used for transportation to realize distribution. In 2020, Dingdong Maicai will lose 2 billion yuan, which corresponds to the performance cost of 20 yuan/single.

The common algorithm in the industry is that the performance cost of the front warehouse is 12 ~ 15 yuan/order, which is calculated according to the gross profit margin of 20%, and it is necessary to increase each income above 80 yuan to cover all costs. This figure can't be reached in Dingdong Maicai and every day. According to Guosen Securities' estimation, even if Ding Dong can reduce the performance cost to 7 yuan/order, it will still lose 660 million yuan in 2020.

The difference between traditional fresh sales and fresh e-commerce is that fresh e-commerce plays the role of distributor, and riders replace supermarkets/vendors. However, it is still the low-profit vegetable selling job, but the overall cost has risen. 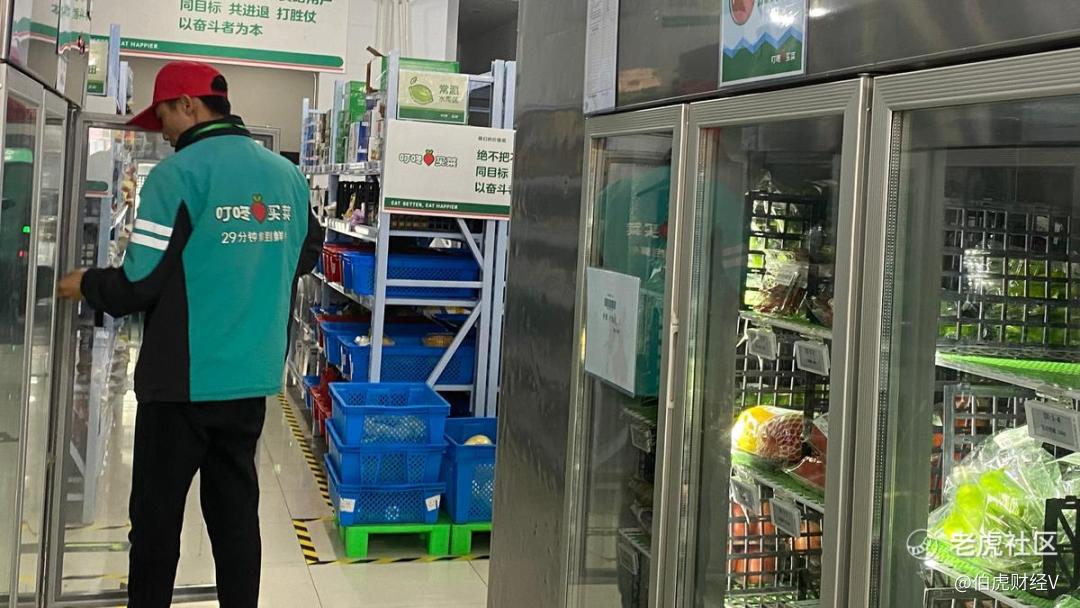 Dingdong Maicai, how can we win?

Regarding profit, the direction given by Dingdong Maicai is: member economy and prefabricated vegetables.

The data is not optimistic. The repurchase rates of Ding Dong members in one year and two years are only 64.2% and 70.5%, which are lower than the daily excellent and fresh. Since the launch of the membership program, the retention rate of members has been less than 50%.

Compared with Weizhixiang, which was listed before, its gross profit margin is only about 25%, and its revenue and net profit increase by 30%-40% annually. It remains to be seen whether prefabricated vegetables can bear the main profit of Dingdong Maicai.

Liang Changlin, founder of Dingdong Maicai, has his own views on the non-dominant customer price. Compared with the daily excellent fresh, the unit price announced by Pupu Supermarket is 80 ~ 90 yuan, and the unit price around 60 yuan in Dingdong Maicai is not high. The industry believes that "there is no possibility of profit without pulling the unit price of customers above 80 yuan".

Liang Changlin disagrees-the consumption level of a family eating vegetables in one day is in 50 yuan and 60 yuan, which is the most reasonable unit price. When the platform mentioned the unit price of customers to 90 yuan, many dishes could not be used, and they broke down after being put in the refrigerator for a few days. "This is the demand of 50 yuan and 60 yuan, then do business in 50 and 60 yuan."

Dingdong Maicai repurchase rate model formula: V = (a + b + c + …) * d n. V is scale and revenue, (A + B + C) is traffic, D is the growth factor dominated by repurchase rate, and N is the number of purchases. Liang Changlin said that after consumers get into the habit of buying food online, N will be particularly large.

Unlike giants, Dingdong Maicai has no huge diversion channels, and can only spend money constantly to pull new ones and keep them. According to the financial report, Dingdong Maicai's marketing expenses in the third quarter were 428 million yuan, up 206.8% year-on-year. The main ways of pulling new ones are offline pushing and online fission and delivery. Crazy marketing has brought considerable data. As of the third quarter, the average number of monthly trading users in Dingdong Maicai increased from 4.8 million in the same period last year to 10.5 million, an increase of 120.3%.

However, according to Hu Chuncai, a retail management expert, in 2019, the customer acquisition cost of the fresh e-commerce industry has reached about 300 yuan/person. Apart from the amount of direct subsidies from Dingdong Maicai and the promotion expenses from other aspects, the cost of obtaining new products in Dingdong Maicai may have exceeded that in 300 yuan.

In front of Dingdong Maicai, a more difficult problem is the threat of giant + community group buying.

Although Dingdong Maicai and Daily Youxian are listed, their profits are far away. However, community group buying shows its profit potential in a better mode. During the epidemic period, the community group buying model preferred by Xingsheng has achieved initial profit, which is also the reason why giants follow suit.

The front warehouse does everything by itself and does everything; Community group buying has more advantages in performance mode and cost control, and what the latter can share is divided out.

It is also a business with little profit margin and high loss rate, and the final cost is naturally shared with consumers. At this point, community group buying is obviously more dominant.

A Yu, who has repurchased Dingdong Maicai for many times, placed the first order "Meituan Preferred" with the mood of trying when he learned that the fruit preferred by Meituan was cheaper. "Take a few steps from the next floor, and you can raise yourself. The point is that fruits with similar taste are really cheaper." Since then, A Yu has been divided into categories in his mind: buying food to Ding Dong, buying fruit to Meituan for optimization.

Bohu Finance Survey found that good experience (quality, delivery speed) has become the reason why many consumers choose Dingdong Maicai. But when another platform with more favorable price and similar experience appeared, Dingdong Maicai seemed to lose its appeal.

The advantage of community group buying lies in its own "cost reduction mode" on the one hand, and its origin on the other hand.

Community group purchases owned by giants such as Meituan Preferred and Buy More Food are considered as "born with golden keys", and when they appear, they will sweep thousands of troops. "Based on the innate advantages of community service providers, Meituan can quickly gather a group of people in a city." A logistics service provider employee said.

On July 7, 2021, Tongcheng Life, a community group buying platform, officially declared bankruptcy. According to media reports, no customers feel uncomfortable because of the sudden collapse of the same journey life, and the large-scale subsidies when the giants enter the market have cultivated a group of highly viscous customers for themselves.

Also because I can't afford to burnDai Shanhui, the founder of the Food Club, who closed down because of money, said helplessly, "The direction of progress has been blocked by the giants."

At present, on the same track as Dingdong Maicai and Daily Youxian, there are also fierce chasing Meituan to buy food. People in the industry once mentioned that "once Meituan entered a new field, just like Tencent and Xiaomi in those days, other companies in this industry were afraid, because Meituan would study competitors in depth and then stand on their shoulders and move forward. At present, Meituan is still benchmarking Dingdong Maicai and Pupu Supermarket to learn some of their styles of play, but it doesn't pay much attention to daily excellence. "

Near the place where Ah Yu lives, there is a front warehouse in Dingdong Maicai, and riders in Dingdong Maicai can often be seen when commuting. One day after work, she met the rider in the narrow alley again, still the same set of equipment-green delivery clothes and delivery boxes. A Yu subconsciously thought that this was another rider in Dingdong Maicai. However, when the rider passed by, looking back, there were four striking words written on the distribution box: "Meituan buys food".

Nowadays, the killing is still going on. Not long ago, the news of a large number of layoffs came out from the Ten Clubs, which also made the whole war a little more anxious. How to survive in the cracks is a proposition left to Dingdong Maicai.

1. Brocade: How did fresh e-commerce become an "outcast of the times"?

3. Zinc Finance and Economics: In less than three years, it lost 10 billion yuan, and Dingdong Maicai burned money to compete for the first place